How does your car air-conditioning work?

You might have wondered just how the air conditioning on your vehicle actually works, or perhaps you have never given it a moment’s thought. Just in case you are curious, here is a not so technical overview on the operation without going into the mind boggling physics behind it all.

Air conditioning like it says ‘conditions’ the air. It not only cools it down, but also reduces the moisture content, or humidity. All air conditioners work the same way whether they are installed in a building, or in a car. The fridge or freezer is in a way an air conditioner as well.A number of people don’t realise that turning on the air conditioning actually reduces the number of miles per gallon of your car. There is energy used in removing the heat and moisture from the air in the car, and this consumes petrol/diesel because of the extra engine load.

Air conditioning’s main principles are Evaporation and Condensation, then Compression and Expansion. Here are some simple explanations of those principles:

Condensation: Have you ever noticed when somebody walks in from the cold into a take-away wearing glasses, their glasses steam up? Why is that? It’s condensation. The moist air of the take-away cools as it contacts the cold surface of the glasses and the air has less capacity to hold moisture, so it condenses into water on the glasses.

Heat of Compression: Have you ever noticed when you pump up a bicycle tyre with a hand pump, that the end of the pump gets hot? This is because the energy that you have put into the air by pumping it has not only compressed it, but has also caused the air molecules to push closer together so giving off heat with the friction.

Compression: At some point all gases will eventually become liquid. An example of that would be a can of deodorant – it’s liquid inside the can (because you can hear it when you shake it) but is a gas when it comes out and hits your underarm. The pressure inside the can is higher, so the propellant inside is liquid.

Cooling by Expansion: Going back to the deodorant, you will notice also how cold it feels that’s because the propellant has just expanded in volume quickly.

Anyway, enough about takeaways, armpits and surgical spirits, but those are the basic ideas that are easy enough to explain. The important question is how does all this fit into making your car’s vents blow cold?

Aluminium and flexible hoses connect all the actual components of the air conditioning in your car. Evaporation and condensation, expansion and compression are the physics of why it works. There are five main components to the whole system, namely the Compressor, Condenser, Receiver-dryer, Expansion valve, and the Evaporator.

The fluid that passes around the whole system is the refrigerant. The refrigerant can evaporate at a low temperature, and then condense again at a higher pressure. Vehicles used to use, R-12 refrigerant, used in almost all cars. It was widely available, however it was found to be a contributor to the hole in the earth’s ozone layer as it was a chlorofluorocarbon (CFC). These refrigerants were discontinued, and all cars after 1996 use a non-CFC fluid called R-134A which is kinder to the environment.

So, here is how all the various parts of a car’s air conditioning works:

Compressor: The compressor is the work horse of the air conditioning system, powered by a drive belt connected to the crankshaft of the engine. When the air-con system is turned on, the compressor pumps refrigerant vapour under high pressure to the condenser.

Condenser: The condenser is a device used to change the high-pressure refrigerant vapor to a liquid. It is mounted in front of the engine’s radiator, and it looks very similar to a radiator. The vapour is condensed to a liquid because of the high pressure that is driving it in, and this generates a great deal of heat. The heat is then in turn removed from the condenser by air flowing through the condenser on the outside.

Expansion Valve: The pressurised refrigerant flows from the receiver-drier to the expansion valve. The valve removes pressure from the liquid refrigerant so that it can expand and become refrigerant vapour in the evaporator. 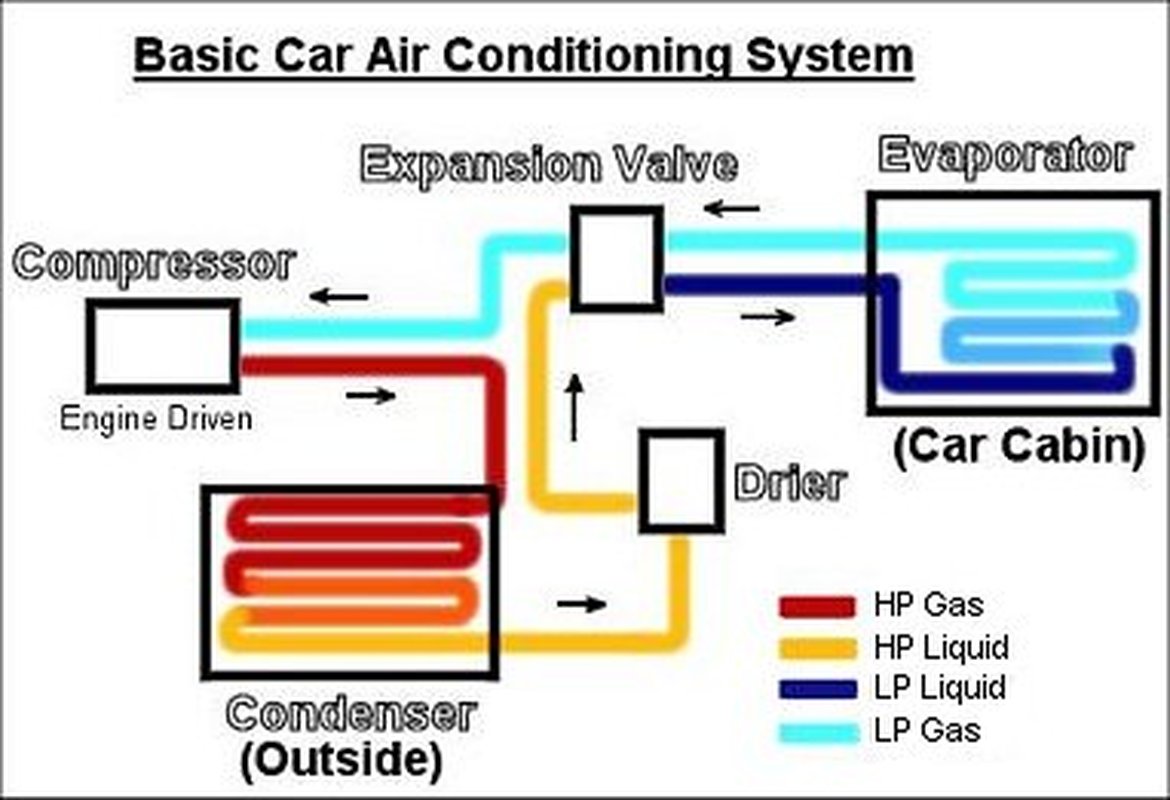 The whole process is reasonably simple when explained like that. All air conditioning systems work on the same principle, even if the exact components used may vary slightly between car manufacturers.

It’s recommended that you use your air-con throughout the year, even in the winter to keep all the main components lubricated and working properly! And don’t forget just like your engine your air-con system also needs servicing from time to time as the gas degrades over time.